While anyone who dares to compare Trudeau to Hitler is criticized because they ONLY equate Hitler with the Holocaust – nothing can be further than the truth. Hitler also made it illegal to have a bank account outside of Germany, which many people did because of the Hyperinflation 10 years before he came to power in 1933. But what is always overshadowed by the Holocaust is the fact that Hitler’s financial dictatorship is why Switzerland created the secret numbered accounts to protect Germans fleeing from Hitler. Canada’s Deputy Prime Minister admitted, under the Emergencies Act, banks can immediately freeze or suspend bank accounts without a court order and be protected from civil liability. This has undermined Canada in the eyes of international capital.

All the Canadian banks went offline together. That was no coincidence. Trudeau has invoked his Emergence Act and is in fact taking the very same tactic that Hitler did which targeted the Jews, but Trudeau is targeting anyone who disagrees with his policies proving to the world, Canada is not to be trusted.

Trudeau has his back up against a wall. He was to deliver the example for the United States to assist Schwab’s Great Reset. Trudeau is a graduate of Schwab’s Young Global Leaders and he has taken an abusive approach to run Canada on directions from his supreme leader – we might as well be honest and give Schwab a title he has aspired to. Schwab has bragged how he has penetrated Canada and has most of his people in Trudeau’s cabinet. Why should people trust Canada? You are not entitled to any trial or proof of your connection to the truckers. Just donating money to them can render you a white supremacist in the eye of Trudeau.

Trudeau can simply now say freeze that account and there is no due process of law whatsoever. This undermines every possible foundation of trust and this is what sent capital fleeing from Germany and the birth of the secrecy laws of Switzerland. We need not compare Trudeau to Hitler for things like the Holocaust, but the very financial actions of Hitler are being directed, and that most likely comes from the World Economic Forum. Trudeau is a complete fool and he has betrayed every principle of a free society all to push this authoritarian system by the World Economic Forum.

There is absolutely NO WAY that the Canadian Banks all went down simultaneously. Trudeau can now order the banks to do as he commands and this is what is very similar to Hitler. They cannot disobey. What does that do to the confidence in Canada as a nation? This undermines the confidence in Canada as even a safe haven in the face of a European war. No bank has dared to try to explain the source of the outrage. If this was non-related to Trudeau, then all Canadian sites would have gone down – not just the banks.

Related Topics:featured
Up Next

The Inequality of the World Economy 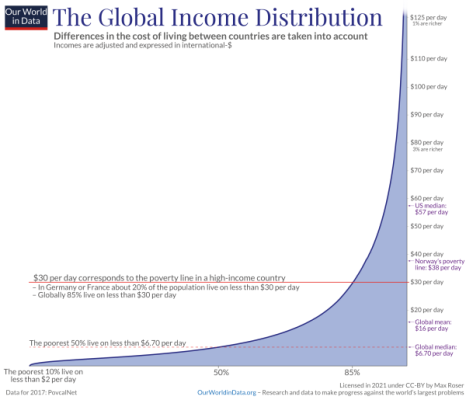 QUESTION: Mr. Armstrong; I have followed your comments on the future of inflation for the last five years at least since a friend attended your conference. I must say you have alone singlehandedly defeated every economic theory I have studied.

Since the start of this pandemic in 2020, most prominent neoliberal economic voices warned of the danger that the spending would create inflation. The U.S. spent more as a share of GDP than any major economy on this planet. There was a mix of direct payments to citizens, forgivable loans to small businesses, and then new pandemic-related federal spending. Yet the data showed inflation in the United Kingdom has hit nearly 10% and European inflation rates were higher. Every G7 nation had higher rates of inflation than the United States. This called into question that there was a possible disconnect between the rationale behind tightening U.S. monetary policy and the actual causes of ongoing inflation rises.

Your favorite economist, Larry Summers, from nearly the beginning of that fiscal response, warned this would trigger inflation. At first, he seemed correct. However, by the start of 2022, U.S. inflation did outpace the average for OECD nations. Yet here in 2022, inflation externally to the U.S. is now surpassing all U.S. levels, and the forecasts of the neoliberal economic thought are in open to doubt as to their outcome.

Your argument against the Quantity Theory of Money appears to be vindicated. Since the U.S. had printed much more money than other economies, then how was it possible that the U.S. would have the lowest inflation rates? The discussion in some circles has tried to explain that at first, the U.S. stimulus remained has been overshadowed by non-monetary factors such as shortages. That has been your expectation years in advance.

Now even wages have risen dramatically ever since the end of unemployment benefits to adjust for the rise in inflation. Yet employment has still not recovered for prime-age workers compared to 2019 levels.

I understand you are not interested in teaching at a university. Perhaps it is time for you to write a textbook to provide a better view of the complexity of the world economy. We are obviously in new territory.

Would you care to explain how inflation is significantly higher outside the United States despite the fact that the U.S. expanded its money supply greater than any other nation?

ANSWER: I know this is a very complex question that most people, no fewer politicians, want to think about. Aside from COVID and the supply chain, Biden & the Green’s attack to end fossil fuels is just totally insane. The US was self-sufficient under Trump. Biden has done everything to undermine that and they have no idea what they are doing. They are making the US economy vulnerable. However, outside the USA, nations are NOT self-sufficient, and the further you move down the rank, the greater it is that their population is living hand to mouth.

Europe has no energy. This push by the Greens in Germany and Austria is just completely insane. Remove Putin in Russia, and you will get a hardline replacement who will see that this is the moment to take Europe, and Europe tried to invade Russia twice before. Cutting off the energy and the Greens have made Europe vulnerable, which the Neocons and NATO salivate over finally getting to use their toys.

The dramatically higher cost of energy in Europe is driving inflation substantially higher in Europe because it also filters over into the cost of transporting everything, right down to food. The inherent problem we always have is that we tend to judge everyone else by ourselves. The world is really different outside the United States. In Japan, the price of gasoline per gallon works out to ?646.548. Japan, instead of taxing gasoline, the government subsidizes it by about ?100 per gallon. Thus, the consumer pays about the same as an American.

The higher the fuel cost, the higher the inflation, at least until the Greens force everyone to ride bicycles, stop heating their homes in winter, and truckers revert back to horse and wagons.

While we have Klaus Schwab claiming inequality is a huge problem, and we need to return to his world of equality, he obviously never considered anyone outside of his own circle. The world is vast. Perhaps we should take all his wealth so he can be equal in wealth to a goat herder in Africa. I’m sure that would solve all the problems of the entire world.

When Will the Baby Formula Shortage End? 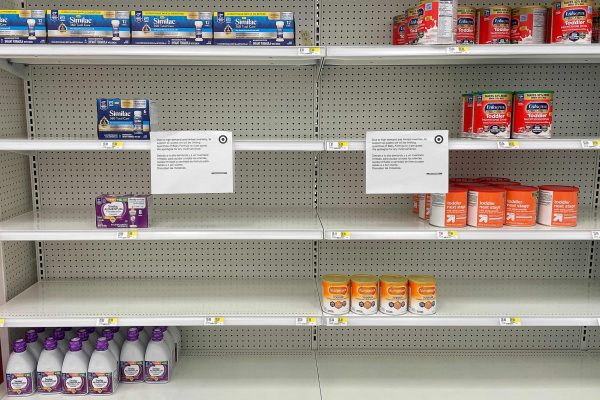 It has been about a month since Abbott Laboratories reopened its formula plant in Michigan, but the US is still in desperate need of baby formula. The plant ceased operations in February after certain formulas were recalled for containing bacteria after infants became sick. Abbott had a huge 40% stake in the formula market within the US. The production plant was supposed to resume operations in June but this was pushed back a month due to flooding in the area. Certain states saw out-of-stock rates near 60% in July, but the national average currently sits at 30%.

The White House secured 17 Operation Fly Formula missions and imported enough powder to make 61 million bottles. The Defense Production Act was revoked to remove some tariffs, but this was a temporary fix. US consumers need enough formula for 65 million bottles per week. Experts now believe that the shortage will last into the fall months.

The Food and Drug Administration (FDA) failed to act in a prompt manner. Some of the red tape and regulations are to blame. FDA Commissioner Robert Califf testified in July, displacing blame from the FDA, and saying that they simply did not know. “No law requires manufacturers of these products to notify FDA when they become aware of a circumstance that could lead to a shortage of these products. Without this information, the Agency may have little or no insight as to when a major shortage may occur, preventing us from taking potential mitigation efforts until a crisis becomes apparent,” Califf said. He believed that formula availability to normalize in up to eight weeks.

An investigation shows that the FDA was first notified of formula contamination in December 2021. In fact, 128 complaints were filed between December 2021 and March 2022. The FDA certainly was aware of the contamination before they took action. The White House also took too long to respond as Biden did not invoke the Defense Production Act until May 2022, when 40% of formula was unavailable. This issue should have been solved months ago but persists due to government incompetence. 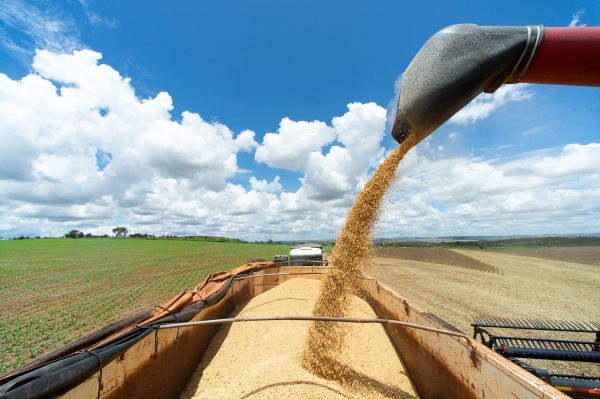 Canada’s Trudeau is proposing to reduce fertilizer with the globalist goal of achieving zero emissions by 2030. Every indicator says that food scarcity is on the rise, and yet politicians are continually making it harder to farm. Trudeau’s plan entails a 30% reduction in fertilizer and is a direct threat to the food supply.

Fertilizer Canada believes this plan will begin hurting agriculture as soon as 2023. The agency believes that Canada may lose over 160 million metric tons of spring wheat, canola, and corn between 2023-2030 alone. Alberta Minister of Agriculture Nate Horner stated that the world is looking at Canada to increase food production amid scarcity and that the government is doing much more harm than good with this ban. “The world is looking for Canada to increase production and be a solution to global food shortages. The Federal government needs to display that they understand this. They owe it to our producers,” he stated.

Who else placed bans on fertilizer, and how did it go? Let’s look at Sri Lanka, which is currently in ruins. Disgraced former President Gotabaya Rajapaksa promised to transition to “organic” farming. In April 2022, the government banned synthetic fertilizers and pesticides and forced two million farmers to switch to organic farming. The plan failed and the downturn was swift. Rice production fell 20% in six months and continued to fall until the nation began importing rice for the first time in recent history.

The Rajapaksa Administration knew it was in serious trouble by 2021 and tried to offer farmers incentives for losses incurred. Now, over 86% of the population of Sri Lanka is food insecure. Countries looking to ban or reduce fertilizer must realize that the outcome will lead to less food. Should we let people starve to “save” the environment?